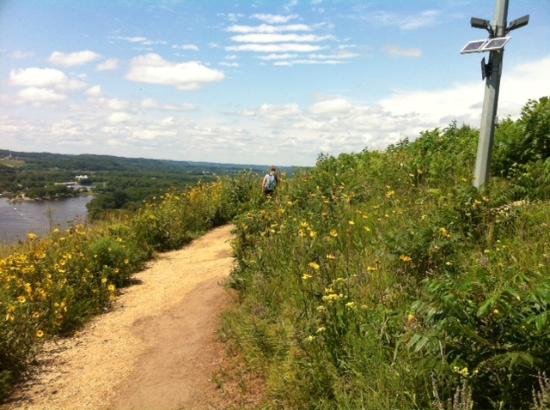 From Saint Paul, follow US 61 South all the way to Red Wing, MN. Stop in Red Wing for a great hike along the bluffs – He Mni Can-Barn Bluff is one of the best-known natural features along the upper Mississippi River. It’s also a great stop for some shopping at the locally owned antique stores, art galleries or boutique shops.

Keep heading South and make a stop at Frontenac State Park for a picnic or just to enjoy the beautiful river views.

When you are ready to move on, pass through the historic town of Wabasha, MN. Wabasha is the oldest city on the entire upper Mississippi River and has been occupied continuously since 1826. Wabasha’s historic district has more than 50 buildings listed on the National Register of Historical Places.

Just a bit further South, stop in Kellogg, MN to visit the unique Lark Toy Store. It has mini golf, a carousel, a trip down memory lane of old school toys, a café, and unique and large selection of toys.

Journey to set up camp for the night at your first campsite at White Water State Park in Altura, MN. Picturesque limestone bluffs and deep ravines (not to mention it’s been known to have barely any mosquitoes!) make this park a very popular camping spot in southeastern MN.

Or if you want to head a bit further down the road, you can camp at Great River Bluffs State Park near Winona, MN. The highlights of the park are the spectacular views, overlooking both the Mississippi River to the east as well as the bluff lands to the west. It’s a great park for some nice hikes.

Further down the river, make a stop in La Crescent, MN—the apple capital of Minnesota. If you want to take a little scenic route from the Great River Bluffs State Park to La Crescent, take a drive on the Apple Blossom Scenic Byway. 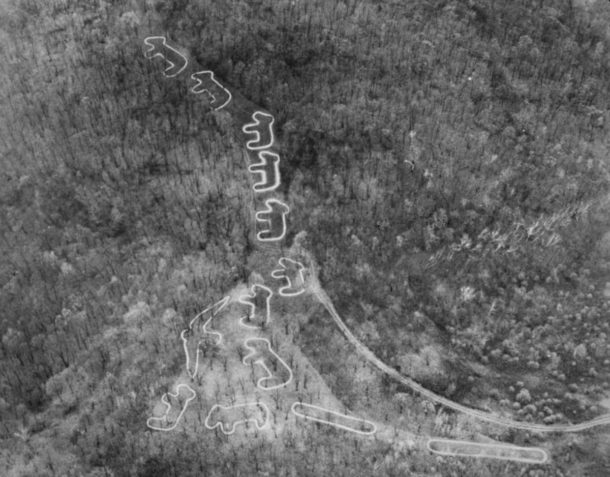 Your next stop is going to be The Effigy Mounds National Monument in Harpers Ferry, IA. This unique park has more than 200 prehistoric mounds built by Native Americans. Numerous effigy mounds are shaped like animals, including bears and birds. They are quite an interesting site to behold.

Another great destination not far from there is Pike Peak State Park in McGregor, IA. It has a 500-foot bluff overlooking the Upper Mississippi opposite the confluence of the Wisconsin River.

Make your way through Iowa and stop in Dubuque, Iowa’s oldest city. There’s a lot to do here including the popular National Mississippi River Aquarium and Museum where you can tour a 1934 steamer and view six big aquariums full of river creatures. Head on over to Cable Car Square to take a ride on the world’s steepest and shortest railway. Venture 3 miles south of the city to take a neat cave tour of Crystal Lake Cave which was discovered by accident in 1868.

If you want to check out a cool live show, travel south to your next destination, Codfish Hollow Barnstormers in Maquoketa, IA. They host live and local bands for shows in their neat old barn. They also offer free camping the night of shows or you can make camp at the nearby Maquoketa Caves State Park or Horseshoe Pond Park.

For the next leg of your journey, you can cross the river and head back North on the Wisconsin side. Your first stop is going to be Prairie du Chien, WI. Experience a tour at a 19th Century Victorian Mansion called Villa Louis. Or learn about some military and medical history at the Fort Crawford Museum. Enjoy a hamburger or two from Pete’s Hamburger Stand. Serving up their unique style since 1908. Also check out Stark’s Sport Shop – an icon to the area featuring taxidermy, hunting, fishing, and liquor – all in one store.

Next head further North to La Crosse, WI and check out some things to see in that historic town. There is a beautiful view from Grandad Bluff that’s worth the trip. They also have a children’s museum if the kids need to burn off some energy.

Keep heading North and stop in Cochrane, WI at the Prairie Moon Sculpture Garden. After a lifetime of working on the prairie, farmer Herman Rusch decided to invest 25-years of his retirement into transforming an old dance pavilion into a bizarre museum and the land surrounding it into a folk-art inspired sculpture park. The museum no longer exists, but the sculptures are still there to check out. Also, in Cochrane is a cool pizza farm called Suncrest Gardens. It’s only open for dinner Friday and Saturday evenings but is definitely something to check out if the timing is right. 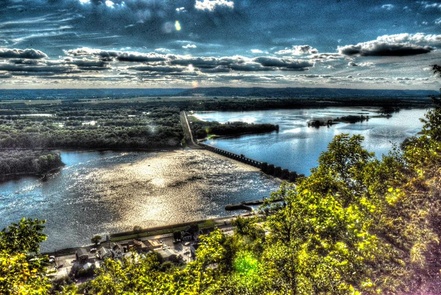 Set up camp for the night at Merrick State Park near Fountain City, WI. It has some lovely riverfront camping sites and is also known for being really great fishing spot.

When it’s time to head back to the Twin Cities, travel back up North along the river to enjoy some lovely views of the Mississippi River valley. Make a pit-stop in Alma, WI to see the outstanding views at Buena Vista Park. Further North, you’ll pass through some neat river towns like Pepin and Stockholm on your way back to St. Paul.

Sign up for specials, new itineraries, and general news from VanGo